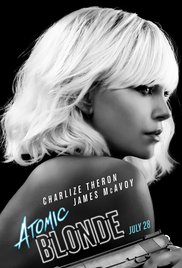 A Failure in Genre Execution

ATOMIC BLONDE bombs for many reasons, but the ABCs are: (A) a false financial premise, (B) a catalogue of clichés, and (C) inept execution of genre convention.

(A) This film began to fail the moment someone invested dollar one. So here’s the five-step system for raising money used all too often in today’s Hollywood:

(B) Today, the US/Russia standoff is hotter than ever, so why not update this Ian Fleming clone to 2017? Because to do that, the writers of both the graphic novel and screen adaptation would have to dig down into reality and unearth the trade secrets of actual spies operating in the world today. No, that would be hard work. Far easier to recycle outworn Cold War chestnuts. Here’s just a few of its spy vs. spy clichés: double agents, double crosses, double bosses, wigged disguises, escapes from submerged cars, and last second getaways just before the train door closes.

At the core of all Action tales sits a McGuffin, defined as: The one thing everybody wants, and when you get it, it gives you power. It could be the ring in THE LORD OF THE RINGS, the bridge in THE BRIDGE OVER THE RIVER KWAI, the falcon in THE MALTESE FALCON, the memorandum in THE QUILLER MEMORANDUM, the file in THE IPCRESS FILE, or the enigmatic “microfilm” in NORTH BY NORTHWEST. No matter how it’s embodied, pursuit of the McGuffin focuses the story’s Spine of Action.

Unfortunately, the writers of ATOMIC BLONDE could not come up with a single, original McGuffin, so they decided to substitute quantity for quality and give us two, both clichés: a traitorous double agent and a list of every secret agent in Europe. In a well-told espionage thriller, either one of these might develop into high-tension intrigue and motivation for mayhem, but in this film, the two McGuffins simply cleave the Spine of Action, blur focus, and water down suspense until neither target seems worth the risk and effort to get it.

The following principle holds true for every story ever told: The life-energy of story pours out of the negative forces that thwart the will and desires of the characters. If these forces are weak and simple, then the protagonist and her story become drab and boring. But if these forces are amazingly powerful and cunningly complex, then she will have to rise to occasion and become a fascinating character with superb physical skills, iron will power, and mental brilliance.

When applied to the Action genre, this principle calls for an antagonist with extraordinary power, pursuing an ingenious, diabolical master plan. In other words, a brilliant villain makes for a thrilling, Jason Bournean hero who performs breath-catching feats of daring-do.

In this film, the Russian spymaster just isn’t up to the task. He has no plan to get the list, and even if he did, he has no power to execute it beyond a dozen goons who can’t land a punch or hit anything they’re shooting at. Because the villain is so inept and dull, the hero never has to do or be anything extraordinary. As spies and counterspies go, the Atomic Blonde is no one we haven’t seen before.

At climax, an Action hero can win out against the villain in only one of three ways: She overpowers him; she outsmarts him; she does both at once. The least satisfying of these three possibilities is the first, overpowering, but that was the MO for the entire film. Scene after scene was packed with repetitious fist-to-fist, gun-to-gun combat. The Action genre offers a rich variety of set pieces, but one chase aside, the writers seemed intent in making Charlize Theron a neo-Jackie Chan, but without his wit.

In fact, the only time the Atomic Blonde uses her brain is at climax when she gets the drop on the villain by hiding her gun in a bowl of ice. But then you might ask, how did she get her gun into spymaster’s quarters in the first place? Did no one think to frisk her? I guess these Russians weren’t paying attention to the story.

Learn more at the STORY Seminar
We are a participant in the Amazon Services LLC Associates Program, an affiliate advertising program
designed to provide a means for us to earn fees by linking to Amazon.com and affiliated sites.