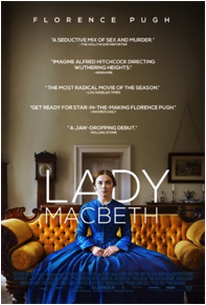 LADY MACBETH (2017)
A Study in the Power of Counterpoint

From its screenplay through its casting and on out to its camera work, this bare-knuckled psycho-thriller employs compelling counterpoint techniques to sharpen both meaning and emotion.

Traditional creative technique calls for content to dictate form. We, for example, convey the intimacy of a love scene with tender words, sensitive acting, and soft light wrapped around the lovers; we express the violence in action scenes with raucous dialogue, athletic stunts, and high-speed editing.

But for this reinvention of Nikolai Leskov’s 1865 novella Lady Macbeth of Mtsensk, screenwriter Alice Birch, cinematographer Ari Wegner, and director William Oldroyd pulled the form-follows-content principle inside out.

LADY MACBETH dramatizes three murders: the poisoning of an old man, smothering of a child, and smashing of a man’s skull until his brains spatter the room. The camera, however, photographs this twisted animality with precise, balanced, often dead-center symmetry, followed by long, slow static portraits of the killer staring straight ahead. Why?

Cinematographer Ari Wegner took her inspiration from the 19th century Danish artist Vilhelm Hammershøi, who in turn took his inspiration from the interiors of homes. Natural light fills his softly shadowed rooms. A piece of furniture on one side precisely balances a solitary figure on the other, sitting or standing with her back to us, looking out a window.

The Dane’s work might remind you of “Arrangement in Grey and Black No. 1” (1871), commonly known as Whistler’s Mother. Like the American master, Hammershøi’s symmetrical compositions are calm to the edge of uncanny.

In theory, symmetry, soft light, and long held static compositions should defuse energy and relax us, but when these aesthetics conceal hideous deeds, counterpoint unnerves the mind. Calculatedly framed rooms of sepulchral stillness—nothing out of place, certainly nothing human—creep us out. To bring us to the edge of terror, Wegner’s obsessively balanced monochrome compositions focus a hypnotic tension between frozen form and scalding content.

LADY MACBETH arouses the high-tension question “Will Katherine get away with murder?”, then answers it in a breath-catching final sequence you will never forget.

To prepare for this turning point, director William Oldroyd made three key casting choices: Florence Pugh, a white actor, as Katherine, the master’s wife; Naomi Ackie, a black actor, as Anna, her servant; Cosmo Jarvis, an actor of mixed race, as Sebastian the stableman.

Audiences may be confused to see servants of color in Victorian England, but the British Empire covered the globe, so why not. This ingenious black/white counterpoint makes the oppression and humiliation of Katherine by powerful, privileged males all that more harrowing, but more strategically, the bold casting sets up a stunning pay-off at Story Climax. As a result, 19th century Northumberland becomes a perfect anachronism for racial and gender politics today.

A character dimension brackets two contradictory qualities in one soul. To create a complex role, a writer first imagines a trait—something physical or behavioral—then looks for an opposite facet to counterpoint it.

When her father-in- law and husband discover her adultery, Katherine plans and executes their murders, making Sebastian her partner in crime and herself owner of the estate. Soon after, her dead husband’s bastard son and heir shows up, while Sebastian holds him down, she suffocates the child.

This last crime overwhelms Sebastian. Like Shakespeare’s Macbeth, his conscience drives him to distraction and confession. Guilt counterpoints his criminality, dimensionalizing his character to powerful effect.

At climax, Katherine betrays Sebastian, destroys Anna for good measure, and gets away with it by manipulating race. She is, after all, a white woman. Her counterpointed dimension of victim/villain, innocent/psychopath, makes her one of the most fascinating characters in recent cinema.

Lastly, many critics have hailed LADY MACBETH as feminist in spirit, but when did feminism become an advocate of evil?