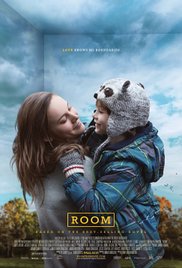 The first half of ROOM gives us a subgenre of the Crime Plot known as the Prison Plot, an action/thriller told from a prisoner’s POV as the protagonist struggles against a villainous warden. Examples: MISERY and THE SHAWSHANK REDEMPTION, both created by Stephen King.

The second half of ROOM turns to an Evolution Plot. This genre arcs its protagonist’s humanity or inner self from negative to positive. In this film, Joy (Brie Larson), suffering from PTSD, moves from a damaged self to a healed self. Examples: The TV series IN TREATMENT, the novels of Tim O’Brien such as Northern Lights, and the films ORDINARY PEOPLE, SOPHIE’S CHOICE, and MYSTIC RIVER.

Why has ROOM’s writer strung together two simple, shallow, half-stories, rather than create one profound, complex, complete story? My guess…creative inertia.

If Joy’s escape plan had failed, and Nick (Sean Bridgers) had locked her and her son Jack (Jacob Tremblay) back inside the shed, then to engineer Joy’s ultimate escape from such cramped sparse space, the storytelling would have demanded ingenious yet credible writing, powered by a gifted imagination. Then the rest of the film would be the author answering the riveting dramatic dilemma: “Will Joy and Jack escape this maniac’s hell-hole? And if so, how in the world will she do it?”

On the other hand, had the film opened with Joy and Jack escaping the shed, then their Evolution Plots would have called for superb creativity of another kind: brilliant psychological insight into the intricacies of PTSD, along with subtle delineations of human nature under mind-breaking pressures. The major dramatic questions now become: “Will Joy and Jack find the inner resources needed to repair their damaged psyches? And if so, how?”

Hows of story can break an author’s back and brain. Some just aren’t up to the heavy lifting. ROOM does not work because neither half of the film comes anywhere near its generic potential. When a writer buys a genre, it comes with a tag that reads, “Use me.”

Why, we might ask, does the weak and shoaly ROOM get a Best Picture nomination? I can think of many reasons: In part because the novel on which it’s based won numerous book awards and the academy likes to wrap itself in things literary; in part because the child’s voice-overs coated the film with the ever-sweet optimism and up-lifting sentimentality the academy loves; and in part because it dramatizes violence against women, a social crisis the academy wants to acknowledge. Despite this charitable gesture, however, I can’t help but wonder if the film would have gotten its Oscar nod had Joy been played by an actress of color and Jack by an ugly kid.

The novel won many awards, sold very well, and reads much like a screenplay. It’s told in the first person voice of the five-year-old Jack, written in the present tense, and for the most part, consists of dialogue scenes. These three devices keep the sexual abuse in the nightmarish shed and the PTSD it causes at an emotionally safe distance. The author is Canadian.

The charm, so to speak, of the novel is its point/counterpoint portrayal of an innocent mind enveloped by a depravity it cannot fathom. The irony that enriches the novel evaporates onscreen for the obvious reason: You cannot photograph thought.

In the novel, we inhabit Jack’s mind as we take his first person point of view. In the film, despite the boy’s voice-overs, we take the camera’s third person point of view. Simply put, prose cannot move sideways into film. To capture the spirit of her novel on screen, author and screenwriter Emma Donoghue would have had to reinvent it radically.