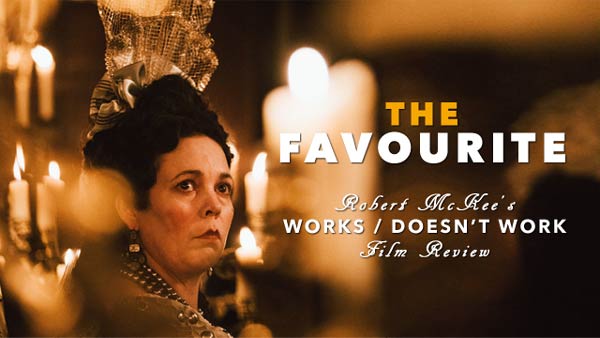 THE FAVOURITE is my favorite for the Best Picture Oscar in 2019.

Here’s four reasons I would love to see it win:

Always remember, a cliché is simply an excellent idea from the past—so excellent, in fact, that writers used it over and over and over until it died of exhaustion. Nonetheless, the idea wouldn’t have lasted centuries if it didn’t have some power at its core. In this case, it’s the power of character revelation through dilemma.

The classic love triangle portrays a woman trapped in dilemma between two men: One who’s warm, caring, supportive and boring; the other who’s handsome, exciting, passionate and a heart-breaker. What’s a girl to do?

“Underdog,” by the way, is yet another cliché and this screenplay deftly inverts it. An ancient, sentimental prejudice has always assumed that an underdog has a heart of gold. In truth, the downtrodden are capable of anything—just like the rich and everyone else.

Abigail’s father sold her across a card table to pay off a gambling debt. Since then, she has suffered repeated degradations, socially, emotionally and physically. But if humiliation taught her anything, it’s how to return viciousness with viciousness.

The screenplay’s original title was THE BALANCE OF POWER. Indeed, this story’s triangle is never about love but always about power.

Gut-churning depictions of violence on the bodies of male characters is decades old. Until now, filmmakers have shown some restraint with female characters. Not here. Every slap, slam, batter, blister and skin ulcer is vivid and visceral. Pain is constant and photographed unflinchingly.

The camera is an x-ray machine for all things false. Badly written dialogue instantly kills credibility as the audience reacts with the thought, “But people don’t talk like that.”

For screenplays set in history, this is a major problem. If the writer faithfully and literally renders the speech patterns of the past, confusion pushes the audience away from the telling. If the talk is too today, again it sounds phony and the jokes don’t work. These screenwriters struck the perfect balance: A smoothly-balanced taste of history, wit and instant ease of understanding.

Because the three women rarely tell each other the truth about anything, room opens up for a deep and constant subtext.

Late in the film, for example, Queen Anne talks to Duchess Sarah about Lady Abigail and says, “I like her tongue inside me.” The text is literal, but what she doesn’t say, yet Sarah reads in the subtext is, “And you don’t do that.” At this critical turning point, the Queen, in dilemma, choses the pleasure Abigail gives her over the attention she gets from Sarah.

The Oscar Question Is This:

Given this film’s brilliant dramatization of off-handed cruelty and greed for power, its honest but unflattering portrait of a lesbian triangle, its explicit treatment of sex as subservience, will the academy give it its due? I doubt it. If you’re betting in the office pool, put your money on the sweet uplift of ROMA.