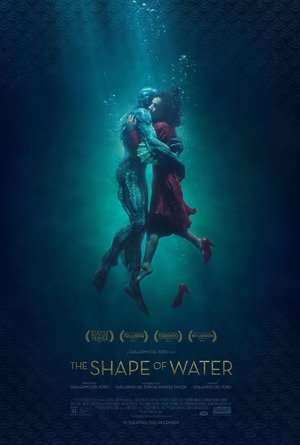 Anti-sentimentalists like Stanley Kubrick (A CLOCKWORK ORANGE, DR. STRANGELOVE, FULL METAL JACKET) and Clint Eastwood (MYSTIC RIVER, UNFORGIVEN, LETTERS FROM IWO JIMA) know that violence, even that done in the name of Justice, has a sadistic pulse. That’s why many of their films express the insanity of violence and give us insight into its cruelty.

A decade ago, Guillermo del Toro made such a film — a tough, imaginative portrayal of that truth entitled PAN’S LABYRINTH. This year not. Instead, with THE SHAPE OF WATER, he’s simply recycled his previous hit into a clichéd, toothless echo.

Del Toro’s new film doesn’t tell story so much as it stirs together various on-the-nose lifts from Sci-Fi and Fantasy past (THE CREATURE FROM THE BLACK LAGOON, E.T., COCOON, THE BEAUTY AND THE BEAST), then tops them off with a dollop of Busby Berkley chutzpah.

To film critics, this soft plagiarism seems homage-y, auteurish, and worthy of awards. Festival judges salivate when a movie recalls Hollywood’s revered lore, as they did over that side order of refried nostalgia, LA LA LAND. Sentimentality marinated in time gains a prestige it never had in the first place. In fact, rebirth with an aura of prettiness is the very definition of an antique.

From world-revered filmmakers like del Toro we expect a degree of honesty, so my first problem with his film is its mawkish treatment of violence. At climax, for example, a cartoonish villain blasts a bullet into the heart of the ultra-innocent Amazon Amphibian. The creature then simply reaches up and swipes the bullet wound away, instantly healed. Turns out, this seemingly helpless victim has god-like powers of immortality. That’s sentimentality so syrupy it’d make Hitler blush.

Let’s examine this term, Art Film. It divides the cinema into those films that are art and those that are not. Now imagine the phrase Art Play or Art Novel. Playwrights and novelists never promote themselves that way; they’d be mortified. So why do filmmakers feel the need to declare in advance that some of them are artists and the others are not? Seems a bit desperate. Second, how does anyone know by category that a film is or is not a work of art before they’ve seen it? Seems a bit specious.

I knew Art Film was BS the first time I heard it. MOONLIGHT and MANCHESTER BY THE SEA are not Art Films; they’re powerful dramas on film and by any measure works of art. Art Film means, in my view, the substitution of style for substance—one of those god-awful, shallow, pretentious, “beautifully photographed” bores—Paolo Sorrentino’s Oscar winning THE GREAT BEAUTY an all-time picture-perfect example.

No critic will admit it, but like Historical Drama, Comedy, Musicals, and many others, the Art Film is a genre. More specifically, it’s a Presentational Genre, meaning a mode of storytelling that uses primary genres (Action, Love, etc) as content, and then presents them in a distinctive style to signal what attitude the audience should take toward the telling (playful in the Musical, critical in Comedy, reverential in Historical Drama, etc.).

In THE SHAPE OF WATER, the cliché list begins with its arty title, followed by decorative images (especially the opening sequence) that substitute for expressive cinematography, and finally gathers a collection of hip social issues ranging from political, military, and sexual tyranny to racial and disabled prejudice. The film, of course, offers no insight into solutions for these problems because art movies never do. They don’t want to change the world; they want to collect awards.

As told, the story roasts every chestnut in that timeless favorite, the Prison Escape Plot. Bad enough, but to make the telling all the more retro, it recycles the essential cast from del Toro’s previous hit. In PAN’S LABYRINTH, the Falangist Captain Vidal leads the Francoist military against leftwing rebels; in THE SHAPE OF WATER, the Fascistic Colonel Strictland leads the American military against those ultimate leftwing rebels–Communist spies. In PAN’S LABYRINTH, the very young, shy, pure-of-heart Ofelia meets the faun king of the underworld; in THE SHAPE OF WATER, the very young, mute and angel-hearted Elisa meets the amphibian king of the Amazon. Clichéd villains call for clichéd heroes.

THE SHAPE OF WATER merges Art Film stylistics with the high commerciality of two other Presentation genres—Sci-Fi and Fantasy. In these two genres, reality is reinvented and given new laws of cause and effect. Once these fantastic laws are stated, they cannot be violated or the storytelling crumples into jeers.

In Act One, the Amazon Amphibian suffers from terrible wounds inflicted on him during his violent capture, but in Act Three, we find out that he has god-like power to just wipe wounds away with a wave of his webbed hand. If so, why did he agonize in Act One?

In Act One we learn that he’s a fresh water creature from the Amazon River; in Act Three he’s treated as an ocean creature that needs pounds of salt dissolved in his bath water. Why? Did someone forget Act One’s set-ups?

Now, someone who loves this film (and most critics did) could argue that the faults I find are not faults but the filmmaker’s intentions—things he wanted to do. If so, I would remind them of the aesthetic principle known as The Intentional Fallacy to wit: We do not judge a work of art by what the artist says he intended to do. We judge a work of art by the work of art–by what he actually did. And in this case, what he actually did does not work. As we all know too often and too well, there’s no guarantee of art in an Art Film.