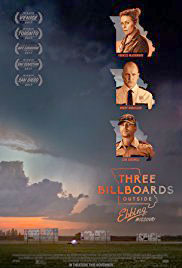 Because writer/director Martin McDonagh is also a superb playwright, his talk sings. When you see the film, listen closely to the elevated language in Frances McDormand’s long speeches and Woody Harrelson’s voice-over letter.

Just to remind you: A dimension reveals itself when a character’s choice of action exposes a sharp contrast or direct contradiction at one of three levels: (1) between two opposed surface traits (sexy eye makeup versus a squeaky voice). (2) Between a surface trait and a hidden truth (a charming criminal). (3) Between two irreconcilable forces at war in the character’s inner life (a secret savage desire versus a guilty conscience).

Note how McDonagh uses contradiction to dimensionalize the film’s parallel mothers: he plays good versus evil in Momma Dixon (Sandy Martin), then kindness versus violence in Mildred Hayes (Frances McDormand). Also note how he dimensionalizes the two gay characters by pitting them against one another: one is in the closet and vicious; the other is out and kind.

What makes this film exceptional is McDonagh’s insight into the human psyche and the new twist he puts on an ancient subject.

The Revenge Plot is as old as the myth of the princess Medea who murdered her children to take revenge on her philandering husband. Euripides’ The Tragedy of Medea enthralls to this day; this was the most frequently produced Greek classic in the 20th Century.

Of all the values that propel stories, justice/injustice provokes the strongest emotions, more than love/hate, freedom/slavery, even life/death. People know that death will take them, laws will constrict them, and love will desert them, but in their heart of hearts they pray: “Dear God, if nothing else, let there be justice!”

On the surface, the dark comedy of THREE BILLBOARDS ridicules America’s racist police, homophobia, and John Wayne inspired vigilantism, punching gut-busting laughs, but beneath the satire, McDonagh focuses on the complex psychology of revenge. He puts the Inciting Incident—the rape and murder of a young woman—in the backstory, then opens with the victim’s mother, Mildred, waiting for justice. After months of investigation the police are literally clueless, so she tries to embarrass them into working harder, but it’s an unsolvable crime.

Then by chance, one of the cops, Jason Dixon (Sam Rockwell) over-hears a drunk bragging about raping a woman and enjoying it. Dixon learns that this guy is not the Hayes killer, but he’s a rapist nonetheless and possible murderer, so he tells Mildred what he knows.

The Inciting Incident creates a terrible imbalance in Mildred’s life that demands righting. Revenge is a Biblical hunger: an eye for an eye. Rape and murder exact a price that can only the rapist/murderer can pay. But does man who pays with his life have to be the one who butchered her daughter? If the world contains one less rapist, would balance be restored? Would a substitute revenge give Mildred justice?

I know of no Revenge Plot that ends with the killing of a surrogate and yet McDonagh makes it seem perfectly logical for Mildred and Jason to seek second-hand vengeance.

Knowing that this wild idea may not satisfy some in the audience, McDonagh brought the story down for soft landing on an open ending. When the co-protagonists drive off, we can’t know for certain if they’ll try to restore the good life by taking an evil life, but I had the feeling that whichever way they choose, the audience would be fine with it.