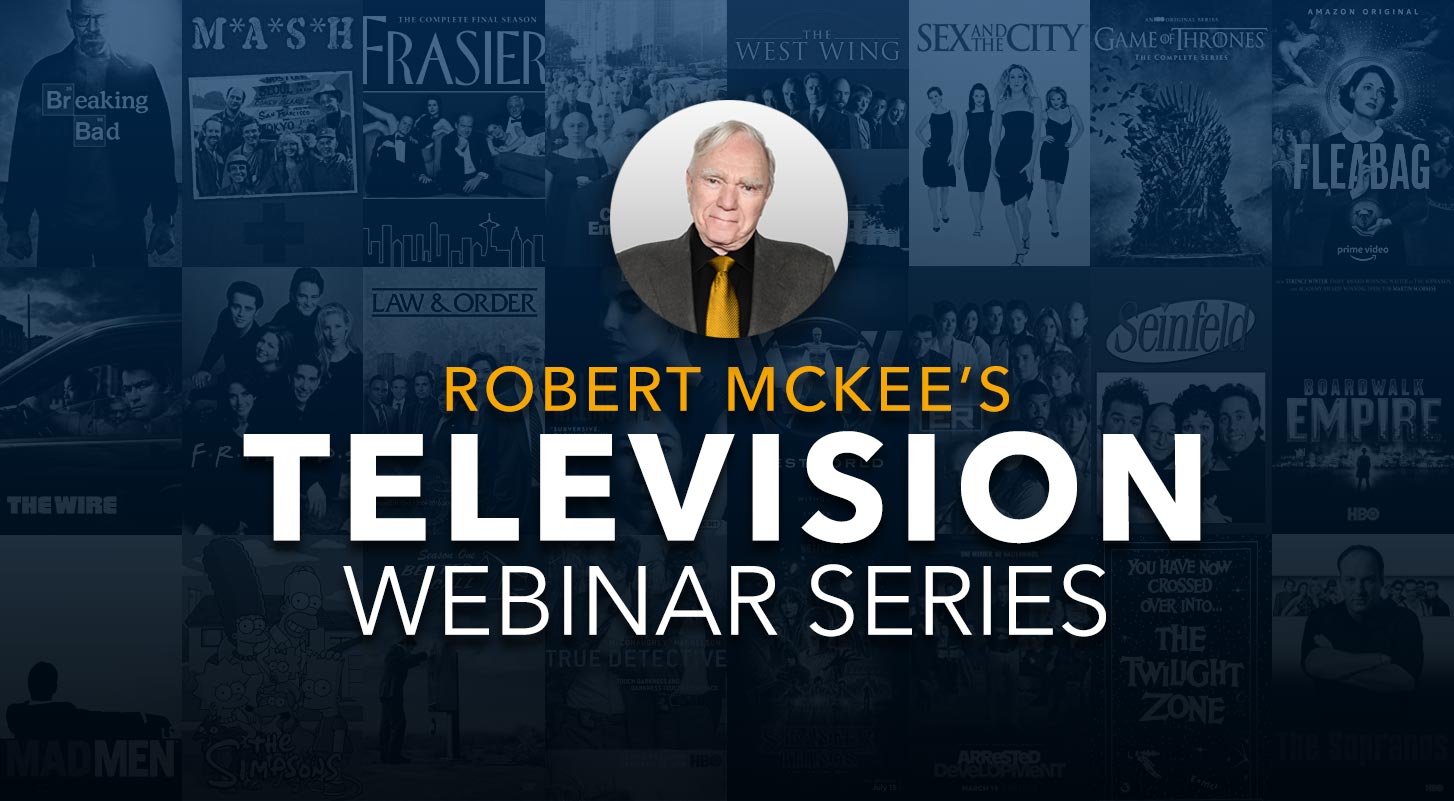 "I'm in the empire business."

Take the best writing from television and ask yourself "What film is the equal of that?" If you study great examples of long-form storytelling, you'll find the answer is simple: they don't exist. TV series have an enormous advantage over film. With the potential to tell a story over dozens of hours, writers have an opportunity to develop a density of complication that no film has the chance to do.

Long-form storytelling on television—and now through streaming services like Netflix—gives your story unprecedented room to roam. But telling a story successfully over multiple episodes, season upon season, demands that the writer reveal character complexity and depths of humanity no medium has delivered before. Does your story have the legs?

In this series of three 90-minute lessons (+30 minutes of Q&A), and three exclusive 2-hour follow-up Q&A sessions, Robert McKee teaches the evolution and strengths of long-form storytelling, how to design your series across multiple seasons, and the depths you can reach in character and story complexity.

Long-form storytelling has already established itself as a dominant artform. Thanks to magnificent series such as BREAKING BAD, THE WIRE and GAME OF THRONES, writing for the screen has brought about a new understanding of story. Shows unfurling over 70+ hours now reveal complexities of character and worldbuilding the likes of which we’ve never seen.

In Part 1 of the series, McKee dissects the history of long-form writing, and teaches the endless variety and strengths of the medium. Topics covered in this webinar include:

Holding the intellectual and emotional interest of your audience is hard enough in a two-hour feature film. Over a multi-season television series this task is next to impossible, unless you give your audience compelling reasons to stay involved. If you botch your series design, they’ll be lost after episode one. But if your show works, they’ll remain rapt week after week, season after season.

In Part 2 of the series, McKee teaches writers how to optimize the shape of their story for a television audience. Topics covered in this webinar include:

Long-form creatives are building the story cathedrals of the 21st Century. This renaissance of storytelling for television and streaming platforms has redefined what’s possible. With the potential to tell a story over dozens of hours, skilled writers have used this advantage to deliver a new breed of complex protagonists, and through their stories have revealed previously inaccessible depths of humanity.

In Part 3 of the series, McKee delivers a masterclass on how to reach the complexity of character and story design only television can deliver. Topics covered in this webinar include:

We are sorry but registration is currently closed.

Wondering which McKee Seminar is right for you? We’re happy to help! Just give us a call or send us an email.

Get a package discount when you book both STORY and GENRE DAY Seminars!

*This offer may not be combined with other discounts.

We recommend that you install the free Zoom client, as it offers a more stable connection and better overall performance during the live webinar.

Throughout the webinar, you’ll have the ability to submit your questions using the Zoom Q&A panel. Our moderator will collect and organize the questions during the webinar, and Robert McKee will answer as many as time allows during the Q&A period that follows.

Registrants will be emailed information on how to access the recording 24 hours after the conclusion of the live webinar. You can watch the recording as many times as you like during the access period.

You can cancel any time before the webinar at no cost to you. Just let us know.

We want you to have the best learning experience possible, so we’re here to help. Please contact us for assistance by emailing contact@mckeestory.com if you’re having technical issues with Zoom.

No refunds will be issued after the live webinar has ended and you’ve been sent the link to the recording. As the recording can be played on so many different devices and systems, it should be possible to watch it on at least one of your devices.

What is Final Draft?

When you purchase the software as part of a McKee Seminar Tuition Package you will receive a substantial discount courtesy of Final Draft. The digital download of the software will be made available within a week of your registration.

If you should need to cancel your registration, you will be refunded your tuition less an administrative fee of 10% and the full price of the Final Draft software.

Do I Need Final Draft For the Seminar?

This software is not required for any of our seminars, but it could be very useful as you go on to apply what you’ve learned in your writing.

Storylogue is Mr. McKee’s online learning library for writers – a writer’s practicum. Currently, the site hosts over 1,500 videos that include new lessons (not covered in his STORY Seminar) and interviews between Mr. McKee and prominent industry professionals as well as Q&A sessions between Mr. McKee and students. These videos are excellent research and learning resources and you can preview the videos offered at Storylogue.com.

When purchasing a year’s subscription as part of a Tuition Package, you receive a discount of over 40% on the standard annual membership rate. Alternatively, annual or monthly membership may be purchased from the site at any time.

Presently, the site is undergoing a massive upgrade to improve the search functionality but it won’t affect your viewing enjoyment.

Can I Register For Someone Else?

Yes, but please ensure that you enter the intended attendee’s registration details (First Name, Last Name, Email) so that their registration information and ticket will be sent to the correct recipient.

When you reach the payment screen, you may use your own personal information associated with your chosen payment method.

Can I Register a Group?

You may register as many people as you like, but at this time we ask that you register each person individually. (You can still use the same method of payment for each registration.)

If you’re registering 5 or more people, you may be eligible for a discount. See here for details.

Do You Offer Discounts?

Do I Qualify for the Repeater Rate?

Our special Repeater rate is based on prior attendance at a McKee Seminar of the same type. For example: If you attended the STORY Seminar in New York last year, you should be eligible for the Repeater rate on all STORY Seminars.

We will check our records to verify previous attendance once we receive your registration. If you are unsure, we encourage you to contact us and we’ll be happy to assist you.

The $100 non-refundable deposit option allows you to reserve a spot at the seminar. The balance is due two weeks before the seminar. If you do not pay in full by that time, you will forfeit this deposit.

What Happens if I Have to Cancel?

The Deposit option allows you to reserve a spot at the seminar by paying a non-refundable deposit of $100. This deposit will be applied to the full price of your desired Tuition Package, the balance of which will be due two weeks before the seminar at the latest. If you do not register and pay in full by that time, your seat will no longer be reserved.

If you cancel 10 days or less from the event date your full tuition will be forfeited, but you may apply it to a future McKee Seminar of the same type within one year of your first scheduled seminar. If you cancel more than 10 days prior to the event date, you have the option to to apply it to a future seminar within one year, or you can be refunded your money less a 10% fee that will be retained to cover administrative costs.

If you purchased Final Draft at a discounted price by bundling it with your seminar tuition, and find that you must cancel your registration, you will be refunded your money less our administrative fee and the full price of the Final Draft software.

I'm from out of town. Can You Recommend Accommodation?

For other options near the Los Angeles venue, please click here

For our New York and London seminars, please click here for options from budget to high-end hotels.